Triage and Sovereignty in West Africa's Time of AIDS 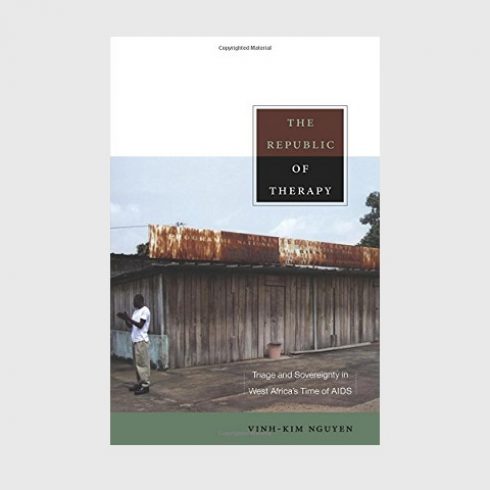 The Republic of Therapy tells the story of the global response to the HIV epidemic from the perspective of community organizers, activists, and people living with HIV in West Africa. Drawing on his experiences as a physician and anthropologist in Burkina Faso and Côte d’Ivoire, Vinh-Kim Nguyen focuses on the period between 1994, when effective antiretroviral treatments for HIV were discovered, and 2000, when the global health community acknowledged a right to treatment, making the drugs more available. During the intervening years, when antiretrovirals were scarce in Africa, triage decisions were made determining who would receive lifesaving treatment. Nguyen explains how those decisions altered social relations in West Africa. In 1994, anxious to “break the silence” and “put a face to the epidemic,” international agencies unwittingly created a market in which stories about being HIV positive could be bartered for access to limited medical resources. Being able to talk about oneself became a matter of life or death. Tracing the cultural and political logic of triage back to colonial classification systems, Nguyen shows how it persists in contemporary attempts to design, fund, and implement mass treatment programs in the developing world. He argues that as an enactment of decisions about who may live, triage constitutes a partial, mobile form of sovereignty: what might be called therapeutic sovereignty.

Republic of Therapy: Triage and Sovereignty in West Africa's Time of AIDS