ROADMAP Project: Thinking transitions in agri-food systems towards a “prudent” use of antibiotics

The use of antibiotics in animal farming is one of the major challenges of the problem of antimicrobial resistance (AMR). More than half of the antibiotics used in the world are given to farm animals for therapeutic or preventive purposes or sometimes with the sole economic aim of increasing farm yields, and this proportion is likely to increase in the coming years. If in some regions these uses are declining, particularly in Europe, this does not necessarily mean that we are witnessing a structural transformation of agri-food systems, i.e. a global transition in the way we produce our food – more respectful not only of human and animal health but also of the environment, animal welfare, food quality or the socio-economic conditions in which millions of men and women around the world work.

The AMR problem thus represents an opportunity to think globally about these transitions in our agri-food systems. This is the objective of the ROADMAP project (Rethinking of antimicrobial decision-systems in the management of animal production). ROADMAP is a European project (H2020), interdisciplinary and multi-actor, gathering 17 partners and implementing research and development activities in 10 countries (8 in Northern and Western Europe, and 2 in Africa and South-East Asia). The project aims not only to analyse practices and knowledge related to the use of antibiotics in various livestock farming contexts, but also to study the forms of regulation, both public and private, and the modes of circulation of these veterinary drugs on national and international markets. To this end, the project is organised into three main pillars:

These three axes are supported by case studies carried out in all the countries involved.

A “prudent” use of antibiotics?

The notion of “prudent” use in a research project raises a number of questions, since it is primarily a policy category rather than a scientific concept. Indeed, it is the term used in many action plans against AMR, particularly in the European Union. If this notion is at the heart of ROADMAP, it is precisely because we want to question it: how to define prudent use? To which practices does this expression refer, or on the contrary which are those that are excluded from it? What are the different possible meanings of this term and how do the different actors perceive it? What controversies does it raise, who are the stakeholders who promote it and benefit from it? Which agri-food systems are implicitly legitimated by this notion of “prudent” use and which ones are disqualified? All these questions should find answers within the project… and could also enlighten the issues surrounding similar notions of contemporary AMR policies, such as rational use or antimicrobial stewardship.

Understanding systems to think of transitions

ROADMAP intends to capture the uses of antibiotics in their complexity. Existing work mostly focuses on antibiotic practices from an individual and/or technical angle: using an antibiotic would be primarily a problem of farmers’ or veterinarians’ behaviours, introducing a technological innovation would be sufficient to reduce the dependence on pharmaceuticals. On the contrary, ROADMAP wants on the one hand to understand individual practices by re-placing them in the socio-technical and socio-economic systems that frame them: agri-food chains veterinary drugs market, professional networks of animal health, national and European public policies, etc. On the other hand, the project aims to replace antibiotic technical and economic issues at the heart of the cultural, professional and political stakes that structure the regulatory regime of veterinary medicines. Thus, practice change can be thought of as a transition of agri-food systems and antibiotic regulation models.  In other words, change must include all stakeholders concerned by the use of antibiotics in animal farming, and not only the prescribers or the end users.

The case studies are diverse and most of the time are based on an approach by sectors and production systems. For example, in Denmark, researchers will compare conventional and organic pig production systems, while in Vietnam, this comparison will be carried out on the poultry sector. In Italy, the development of “antibiotic-free” standards and brands will be compared with strategies to reduce uses that are not marketed as such. In France, these questions will be asked about the pig, poultry and cattle sectors, and particular attention will also be paid to changes in the professional and business models of veterinary practices in the various sectors. In total, the case studies conducted in 10 countries will make it possible, as a whole, to understand the systemic constraints that weigh on the actors and to identify the relevant transition levers specific to each type of context, while developing a critical perspective on the common classifications (such as intensive vs. alternative, ‘good’ vs ‘bad’ antibiotic use, etc.) which are much less defined in reality (i.e. industrialisation of organic agriculture, integration of alternative practices by conventional agriculture, etc.). 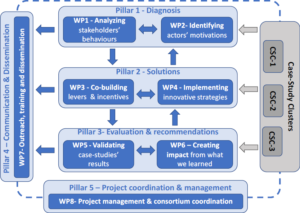 The case-studies articulate qualitative, quantitative and participatory approaches from the social, economic and veterinary sciences. Interviews will be carried out with farmers, veterinarians and livestock technicians, in addition to questionnaire surveys that will allow a better comparison between sectors and between countries. The aim is to understand the practices, working conditions and relationships, as well as the knowledge and values associated with the use of antibiotics. Documentary analyses coupled with other interviews will also be carried out with economic and political actors (industries, public authorities) to map the food and pharmaceutical chains and analyse how they frame antibiotic use in animal farming via a set of public and private standards (contracts, bills of specifications, guidelines, regulations, etc.) (Pillar 1). Then, these socio-economic studies will be supported by interdisciplinary and participatory tools, called Living Labs, designed to co-construct interventions between researchers and stakeholders. The objective is to initiate collective actions considered effective and acceptable by all the concerned actors, and to identify the levers that would foster their implementation (Pillar 2). Finally, on the basis of all the data collected in the cases studies, the project will propose impact measures and transition scenarios in favour of a prudent and sustainable use of antibiotics (Pillar 3).